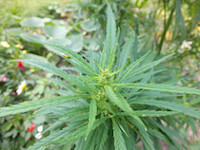 A number of benefits result from growing organic marijuana. As with other organically grown foods, vegan cannabis can help the environment by reducing growers’ and consumers’ carbon footprints and by maintaining biodiversity. Natural farming methods that eschew modern industrialized techniques are better for the environment and for the crops produced from these processes.

Embracing organic farming methods places less stress on the environment from unnatural procedures. The land simply cannot sustain what some farmers ask of it when they use inorganic farming methods. Consequently, the soil often becomes depleted, and it fails to nourish plants adequately. To make up for these inadequacies, farmers often resort to applying more fertilizer to crops. The resulting cycle of soil depletion and increased fertilization tends to spiral and get more pronounced as time goes on.

Unlike the methods used for growing organic marijuana, using toxic substances to grow plants can have a number of harmful results. Pesticides designed to kill insects can damage the environment because these chemicals stay in the ground. Often insects become immune to the effects of pesticides, which leads to the development of more powerful chemical mixtures. The overuse of fertilizers involves excessive use of powerful chemicals, which often has a detrimental impact on the Earth. Fertilizers that contain animal byproducts can have a negative effect on the soil as well. These types of chemicals often take a long time to break down in the soil, leaving residues behind that impact the pH levels of soil negatively.

In contrast, vegan cannabis is grown without utilizing synthetic or animal-based products to fertilize the plants. For example, vegan marijuana avoids harvesting the bat guano that is used in many nutrient regimens, thus reducing the crop’s impact on bat populations. Instead, vegan producers use only natural and plant-based materials that do not take an excessive time to decompose. Although these growing methods can be challenging, the benefits of creating and maintaining a healthy ecosystem for growing organic marijuana are important for the Earth and for the quality of the crops produced.[/fusion_text]